What are the goal statistics?

The Statistics tab below the graph reports some basic facts about the goal and your progress so far. It's also a helpful place to quickly check goal parameters, most usefully the goal's current end date and value.

Amounts Due by Day 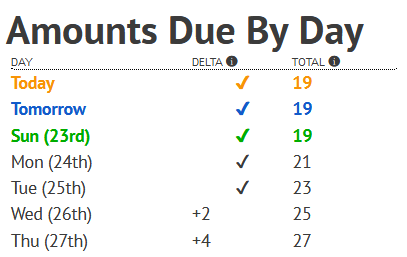 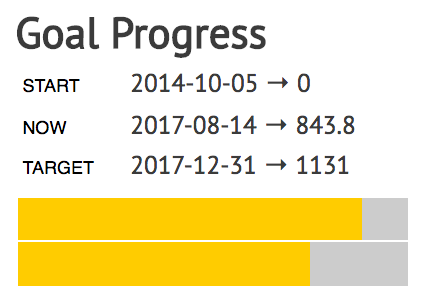 The goal progress is a quick view of where and when you started, where you're at today, and where and when your goal will end. The two gray/yellow bars below are a visual representation of the same information: the top bar shows your goal's progress towards completion by date, while the bottom shows it by unit.

The goal shown above began on 2014-10-05 and was scheduled to end on 2017-12-31. When the screenshot was taken, the goal had 843.8 units since it was created, and at the end date it should be at 1131. (Of course, if you change the goal in the meantime, that value will change too: the stats progress will automatically update!) The top bar is further along than the bottom bar in showing goal progress, because the goal's early rate was lower than its later rate — more progress will be made over less time as it winds down! 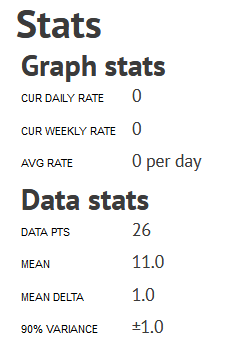 The Graph stats show a little bit of info about your current and historical goal rate. The goal's current daily rate and its weekly equivalent are shown, as well as the goal's average rate since it was created.

The Data stats do the same for your datapoints. 26 datapoints have been entered on this goal, with an average value of 1 per day (mean delta).

The 90% variance is a little more complicated. We also call this the "standard fluctuation". For goals with data that fluctuates around from day to day (think weight loss), this is like the yellow line on the train platform. If your values are this far away from your bright line (the edge of the safe area), then you are safe (well, with 90% probability) from a random fluctuation pushing you into the red. Technically: This is the 90% quantile of the rate-adjusted daily absolute variations in your data. (E.g., if the delta between two consecutive days is equal to the delta of the bright red line itself, that’s a rate-adjusted delta of 0. And, yes, “90% variance” isn’t a thing. We mean variance as in how much your values vary, relative to the bright red line, day-to-day, in the 90% worst case.)