Do Less goals are a feature of the premium subscription plans. They work almost exactly the same way, but you want to be above the bright red line on a Do More, and below it on a Do Less. There are a few extra quirks, but if you're trying to wind down a bad habit, Do Less goals might be the goal type you want. (But if you want to go cold turkey, we recommend you try a Do More first.)

If you're looking for information on Pessimistic Presumptive Reports, you can check below for a quick overview, or on the dedicated page for the details.

When should I use a Do Less goal?

Use a Do Less goal for things you want to limit. You're still going to do it sometimes, but you want to do it less often.

What if I NEVER want to do something?

Technically, you can use a Do Less...

But we strongly recommend that you use a Do More goal to Not Do Something at a rate of 1/day (or 7/week). (More of our reasoning on the blog.) Users have reported finding Do Less goals less motivating and harder to manage. You lose out on any extra motivation from watching the graph build over time. The goal just stays a boring flat line, and any lapses are really obvious, as in the second graph below (the images are from a slightly older style of graph, but the new ones look much the same!).

So instead of making a Do Less goal to eat 0 potato chips, you could make a Do More goal to spend a day without eating potato chips, 7 days a week. Every day you succeed at your goal, you'd enter a +1, and stay on the bright red line!

A 0-rate Do Less goal does work, but you can definitely reach the same goal by rephrasing it as a Do More goal.

How should I enter data for a Do Less goal?

Beeminder needs to know how much you did that day. Behind the scenes, it adds up all your datapoints to show you how much you've done since starting the goal.

Let's say I have a goal to drink less coffee — at most 4 cups per week, to be exact. I drank 0 cups on the day I created my graph, I submitted a 0. The second day, I drank one cup and submitted 1 to my graph. The following day, I've abstained again, so I submit a 0. And so on.

After those three points have been submitted, the graph will look like this: 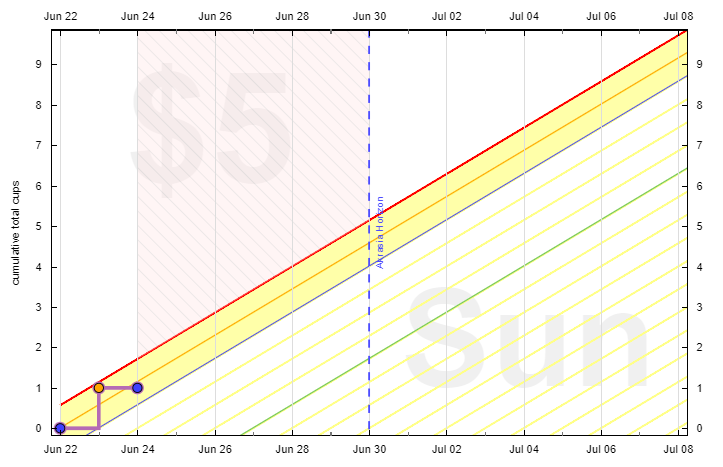 I'm below my bright red line — doing better than my goal rate! Cool. And Beeminder's keeping a running total of all my progress for me, so I know I've only had 1 cup of coffee since starting my goal. 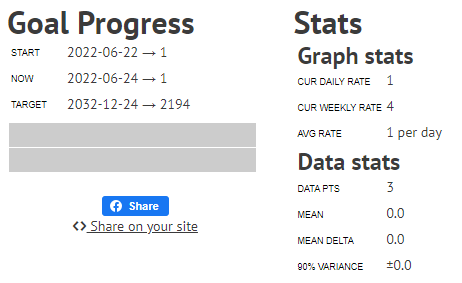 What happens if I never enter data?

With a Do More, if you abandon the goal, you'll eventually go off the bright red line and derail. But as you might have realized already, the Do Less goal has no power over you if you don't actually use it.

See how when the user didn't do anything on this old Do More goal, it derailed a bunch? But not entering data on a Do Less goal just gave me a ton of safety buffer, even though I was doing the thing I wanted to avoid quite a bit.

That tended to utterly destroy the power of Do Less goals, except for the extraordinarily fastidious. So we came up with the pessimistic presumptive report (PPR). A PPR is a datapoint Beeminder automatically enters if you don't enter one yourself. Given enough time, the PPRs will eventually cross over the bright red line, and you will derail. This helps keep the goal effective: as the data climbs nearer and nearer to the bright red line, Beeminder will start sending you more and more frequent reminders about the goal, which will hopefully remind you that you wanted to stop doing that thing!

Here's a goal where the user was pretty good about entering data for the first few weeks. But then she fell off, and there have been enough PPRs added that she's approaching her top limit... 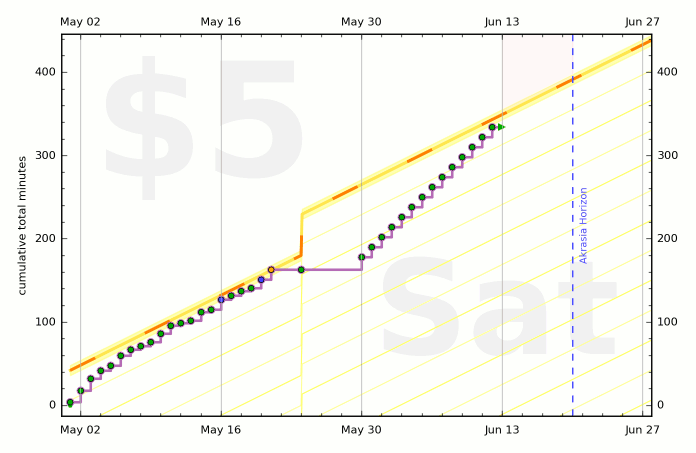 PPRs will make sure you can't just walk away!

Why is my Do Less goal going up, when I want to be doing it less?

The Do Less goal is graphing the cumulative number of times you've done that thing since the goal began. In most cases, you can't undo things once they've been done (e.g., can't unsmoke a cigarette, can't uneat a pint of ice cream), so that number will always be 0 or increasing. The goal is to make sure it increases more slowly than the bright red line, so that you stay below the limit and avoid derailing!

I'm going on vacation and won't be working on my Do Less goal. How can I pause it temporarily?

For a Do Less goal without automatic data, all you need to do is make sure the PPRs are turned off, and then enjoy your vacation! If no data is entered while you're away, you cannot derail. You can get rid of any unwanted safety buffer when you return, or enjoy your new allowance.

For other solutions where you can leave PPRs turned on, you can check out the info on the dedicated PPR page!

How do I get rid of extra safety buffer on my Do Less goal?

Use the Ratchet section in the Commitment tab below the graph to choose the number of units of safety buffer you want, then click Ratchet!

There is a small difference from all the other goal types, which use days of safety buffer, rather than units. Days of buffer are a bit of an illusion for Do Less goals, because you might be able to use up all your buffer in 1 day, no matter where you started. So we just let you decide exactly how many units should be left after the ratchet. For instance, here I have +11 cups of buffer, so I could drink 11 cups today. If I want to reduce that to 2 cups of coffee allowed today, I need to enter 2 in the box and then click the button.